My Ireland Heritage find your Ancestors and exact house location from the 1700’s to the late 1800’s, and all available records in Ireland. We are an Irish family business dedicated to assisting you in your Irish Genealogy research for your roots and records of your family history of past generations in Wexford, as well as providing you with a once in a lifetime Irish Genealogy tour experience to visit your families original family house and Walk in the Footsteps of your Irish Ancestors.

Sean and the Team at My Ireland Heritage are a Government certified & approved Genealogy & Touring Company, and will personally guide you on the journey into your Irish ancestry to any County in Ireland.

Many companies are genealogy research only, many companies are touring companies only, we at My Ireland Family Heritage are proud to be able to encompass your research and tour together enabling us to work with you throughout the process to customize your tour with you and for you. To achieve a full genealogy tour experience consider adding one of our one-day historical tours.

Having found the Townland we must now find not just the Civil Parish identified on your records but the correct Church. On your records you may see a Civil Parish this most likely is not the Church your Family used for Marriage/Baptisms and weekly use.

As an example take County Meath there are 146 Civil Parishes in County Meath. Your Families Church may be Culmullin it is bordered by 7 different Parishes but it is also in the Parish of Dunshaughlin. Your records may say Parish of Dunshaughlin but your Ancestors Parish and church they used for important events is actually 10 Miles away at Cullmullin. To Compound the issue there are 5 Baronies in Meath with the word Rath and 47 Townlands with the word Rath included.

Finding the correct Graveyard for your family for the Townland. Again an example a Parish like Dunshaughlin may have 10 Graveyards in Fact the Parish of Cullmullin above which is in the Civil Parish off Dunshaughlin has 3 Graveyards alone one for 1700 one for 1800s and a Modern graveyard.

Again this is our responsibility to find the Correct Graveyard for your Church and your families Townland.

At My Ireland Heritage our Data Base allows us to find the exact Location of your Families house in the 1800s. Once we travel her on your Behalf we will know very quickly if the family are still in the vicinity. In fact even if they are not we have the knowledge to know if the neighbors who may be there for 200 years are also still in the Vicinity.

County Wexford is in the province of Leinster. It is named after the town of Wexford and was based on the historic Gaelic territory of Kinsella, Uí Ceinnsealaigh, whose capital was Ferns. The population of the county is 145,273 according to the 2011 census.

The county is rich in evidence of early human habitation. There are many items such as Portal tombs existing from the Neolithic period. Remains from the Bronze Age period are far more widespread. Early Irish tribes formed the Kingdom of Uí Cheinnsealaig, an area that was slightly larger than the current County Wexford. County Wexford was one of the earliest areas of Ireland to be Christianised, in the early 5th century. Wexford town became a Viking settlement near the end of the 9th century.

Wexford (Bannow Bay) was the site of the invasion of Ireland by Normans in 1169 at the invitation of Diarmuid Mac Murrough, king of Leinster , which led to the subsequent colonisation of the country by the Anglo-Normans.

On 23 October 1641, a major rebellion broke out in Ireland, and County Wexford produced strong support for Confederate Ireland. Oliver Cromwell and his English Parliamentarian Army arrived 1649 and his armies rampaged until 1653. The lands of the Irish and Anglo-Normans were confiscated and given to Cromwell’s soldiers as payment for their service in the Parliamentarian Army for services against the then King Charles the 1st. At Duncannon, in the south-west of the county, James II, after his defeat at the Battle of the Boyne, embarked for Kinsale and then to exile in France. 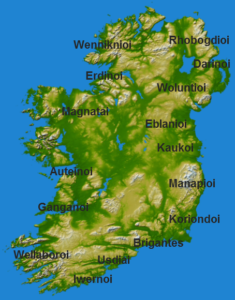